The pipa is a four stringed lute with a pear-shaped body. Its short, bent neck has 30 frets which extend onto the soundboard, offering a wide range. This instrument appears in texts dating up to the second century B.C. There are a lot of written texts of the Han Dynasty (206 BC - 220 AD) about pipa music played and the stories that inspired the composition for those pipa pieces. Since the Tang Dynasty (618-907), the pipa is one of the most popular Chinese instruments, and has maintained its appeal in solo as well as chamber genres. The pipa technique is characterised by spectacular finger dexterity and virtuosi programmatic effects. Rolls, slaps, pizzicato, harmonics and noises are often combined into extensive tone poems vividly describing famous battles or other exciting scenes. The instrument is also capable of more lyrical effects in pieces inspired by poetry, landscapes and historical themes. Pipa music has been loved by Chinese people through centuries and there is a large repertoire of pipa music handed down from generation to generation through individual artists and scholars. (more ...)

The Guzheng (pronounced "Goo-Zheng"), originally known as "Zheng", is a plucked string instrument that is part of the zither family, related to the Japanese koto, Vietnamese dan tranh and Korean kayagum. In fact, the guzheng is one of the most ancient Chinese musical instruments that recorded in written documents in the Qin dynasty (about 220 BC). Due to its long history, the zheng has been called guzheng or Gu-Zheng where "Gu" means "ancient" in Chinese.

Guzheng is build with a special wooden sound body with strings arched across movable bridges along the length of the instrument for the purpose of tuning. In the early times the zheng hat 5 string, developed into 12 to 13 strings in the Tang Dynasty (618 - 907AD) and 16 strings in the Song and Ming dynasty (from the 10th to 15th century). The present day zheng usually has 21-25 strings. The instrumentalist plucks the strings with the right hand and touches the strings with the left hand to produce the desired pitch and create subtil tones and ornaments. The gu-zheng has been a popular instrument since ancient times and is considered as one of the main chamber as well as solo instruments of Chinese traditional music. Since the mid-19th century, guzheng solo repertoire has been growing and evolving towards an increasing technical complexity. 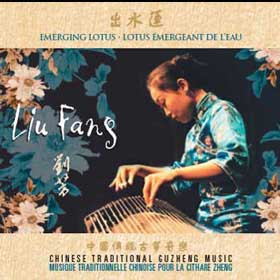